Discuss the significance of anchorage in orthodontics 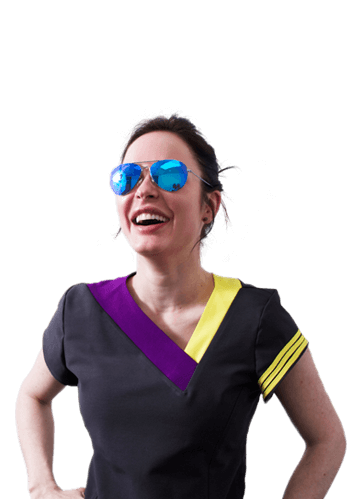 MJ is our captain and lead clinician. She excels at facial aesthetics and adult braces

Discuss the Significance of Anchorage in Orthodontics 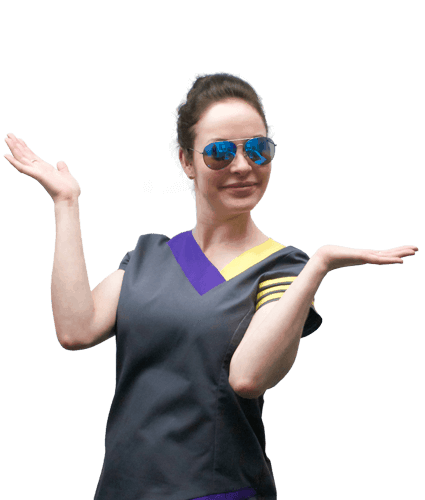 This is an academic presentation for use by dentists and orthodontists about principles and efficacy of anchorage.  If you’re a patient wanting to speak to someone about your own orthodontic treatment at Smileworks then take a look here:  Orthodontics at Smileworks.

Anchorage is defined as the resistance to unwanted movement in line with Newton’s 3rd Law which states every action has an equal and opposite reaction (Proffit, Fields, & Sarver, 2013; Roberts-Harry & Sandy, 2004).  Teeth can absorb and prevent shock and trauma and resist displacement, but are not absolute rigid fixation (Strang, 1941).  It is for this reason that anchorage considerations in Orthodontics are ever important.

In order to elicit the desired effect, anchorage should be considered in the horizontal, vertical and sagittal plane (Naish et al., 2015) 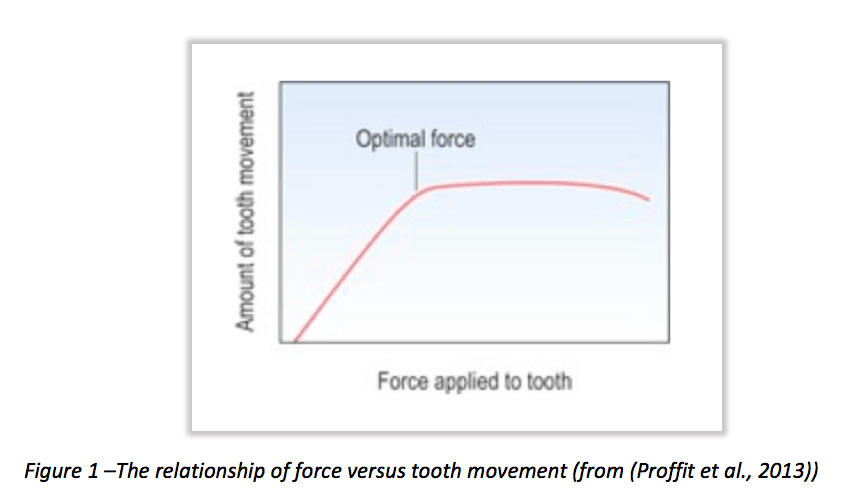 Optimum force can be described as that which elicits a maximum or near-maximum response, the magnitude of which is dependent on the required tooth movement (Proffit et al., 2013).  Table 1 shows the forces required to move teeth.  Applying force above these values is likely to have a deleterious effect on anchorage, over-compressing the periodontal ligament, and resulting in cell death, hyalinisation, undermining resorption and compromising the tooth (B. Melsen & Verna, 1999; Naish et al., 2015). 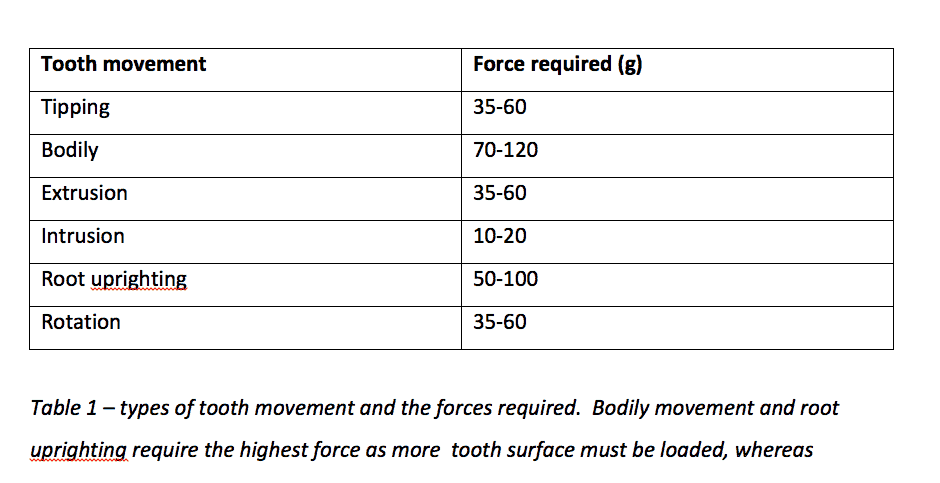 The force levels generated depend on the properties of the appliance, with wire material, deflection, length and thickness affecting force control.  A continuous gentle force is most effective in ensuring intended tooth movement, occurring around 14 days after compression of the periodontal ligament.  This is why fixed appliances are so effective (Birte Melsen et al., 2007; Roberts-Harry & Sandy, 2004).

In order to achieve the correct tooth movement, it is necessary to concentrate force where desired and distribute reaction force over a number of different anchor teeth (Proffit et al., 2013).  The differential force theory states that tooth movement is dependent on the surface area of the tooth to be moved, and that an increased root surface will have higher resistance and thus a higher anchorage value (Hixon, 1970; Quinn & Yoshikawa, 1985).

Figure 2 shows representative values for the root surface of teeth, showing that the combined root surface of anterior teeth is same as premolar and molar combined (Roberts-Harry & Sandy, 2004).

Simple anchorage pits one tooth against another, whereas compound anchorage utilises more than one tooth in the anchor block to produce differential movement in favour of the less supported section.  This is shown in Figure 3 and 4.

Equal movement of either units toward each other due to equal force distribution on equal sized teeth is referred to as reciprocal anchorage and is used in diasthema closure (Quinn & Yoshikawa, 1985).  The requirement for this to be effective is that the teeth involved have the same total root surface area (anchorage value) in both directions.

Reinforced anchorage is required for the differential movement of one tooth over another, for example when retracting the anterior teeth into a premolar space.  The addition of the second molar to the anchor block to distribute reaction force over anchor units and increase the root surface area causes space closure by distal movement of the anterior teeth whilst maintaining the posterior section in place.

Stationary anchorage is utilised in the Begg technique, allowing bodily movement of one anchor group against tipping of another by adding anchor bends to the wire (Hixon, 1970; B. Melsen & Verna, 1999; Proffit et al., 2013; Roberts-Harry & Sandy, 2004).

Soft tissue anchorage can be gained from lip bumpers to reduce mesial movement of lower molars.  The palatal vault can also supplement anchorage to prevent mesialisation of posterior teeth by using a Nance button, which is effective in high vaulted palates (Naish et al., 2015).

Cortical bone provides resistance to tooth movement; it is observed that roots pushed against the cortical plate increase the anchorage value of the teeth, and that this is increased in mandibular over maxillary teeth due to the density of the bone (Hixon, 1970).

Ankylosed teeth can serve a purpose for anchorage, becoming fused with bone due to prior trauma.  After use, they may be retained or removed (Naish et al., 2015).

Implants provide absolute anchorage, which may be temporary or permanent.  Movement of the anchorage unit is not possible due to inhibition by bone, resisting orthodontic displacement.  Temporary anchorage devices (TADs) include mini-screws, miniplates, mini-implants or onplants, whereas anchorage can also be gained from endosseous, permanently placed implants otherwise used to replace teeth (Cornelis, Scheffler, De Clerck, Tulloch, & Behets, 2007; Papadopoulos & Tarawneh, 2007).

Mini-screws are placed chairside and immediately loaded prior to osseointegration, which is as low as 5%.  Although failure is quoted around 0-19%, compliance is improved in TADs compared with headgear, and their easy removal and lack of required patient compliance save for oral hygiene makes them ideal for use in anchorage reinforcement (Cornelis et al., 2007; Papadopoulos & Tarawneh, 2007; Sandler et al., 2008).  There is a range of opinion on TADs and their effectiveness, with one Cochrane review showing TADs as more effective than conventional anchorage (Jambi et al., 2014), whereas another found there to be no difference in anchorage support, but with better treatment outcome with TADs (Sandler et al., 2014).

Headgear achieves anchorage from the cranial vault.  It connects to the intraoral appliance via facebow and is worn around 12 hours per day. Primarily used for distalisation of molars, the direction of pull on the extraoral device alters the vertical component, as seen in Figure 5 (Naish et al., 2015).  Cervical headgear can extrude and distally tip upper molars due to the direction of force.  This can be reduced by using occipital or high pull headgear, which does not exert as high a force.  Reverse headgear is effective for mesial movement of teeth in class 3 cases (Roberts-Harry & Sandy, 2004).  Their use is declining due to more prominent use of implants for anchorage, issues with compliance and safety concerns with regard to ocular injuries (Naish et al., 2015). 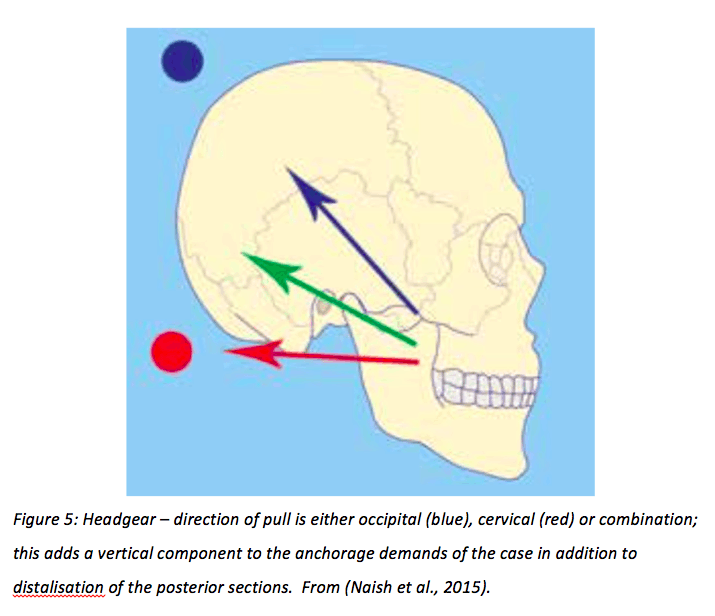 Anchorage demand can be described by the proportion of the space created by the extraction that will be used up to complete treatment;

Further factors to consider are the type of tooth movement.  Teeth that have increased angulation or inclination require more anchorage.  For example, an unfavourably tipped canine will exert higher force on anchor teeth than one which can be simply retracted into a premolar space (Naish et al., 2015).

With good anchorage control in orthodontic treatment, spaces should not remain at the end.  This may mean planning for anchorage loss to finish the case (Naish et al., 2015).

The choice of extraction affects anchorage.  Premolars are most commonly extracted due to their position within the arch; close to anterior crowding, the posterior section can be used as an anchorage unit.  Extraction of first premolar will reinforce posterior sections, often used if anterior teeth are to be retracted.  Extraction of second premolars will weaken posterior anchorage, which is often chosen when mesialising molars (Naish et al., 2015).

Tipping teeth in the opposite direction to their preferred movement, so-called tip-back, can also reinforce anchorage (Naish et al., 2015).

The use of Transpalatal arches (TPA) is contentious.  Cited to have beneficial effects on anchorage by adding rigidity and maintaining transverse relationship, preventing mesial migration, rotation and anchorage loss (B. Melsen & Bosch, 1995; B. Melsen & Verna, 1999), their effects have not been substantiated and are based largely on anecdotal clinical experience rather than actual science (Diar-Bakirly, Feres, Saltaji, Flores-Mir, & El-Bialy, 2017; Zablocki, McNamara, Franchi, & Baccetti, 2008).  TPAs can be effective with mid-palatal implants or Nance buttons, but these in turn can cause complications by embedding into the mucosa, requiring surgical removal (Naish et al., 2015)

Laceback ligatures do not appear to supplement anchorage (Feldmann & Bondemark, 2006).

In cases where anchorage not only requires preservation, but increase, maxillary buccal segments may need to be distalised.  This can be achieved with headgear, or headgear in combination with a Nudger appliance, which combines a removable appliance with headgear use.  However, if headgear compliance is not optimal, this may result in increased overjet and poor outcome.  The use of TADs is therefore often preferred (Naish et al., 2015).

Anchorage loss is multifactorial and is defined as the unplanned movement of anchor teeth in orthodontic treatment due to poor appliance design, lack of anchor teeth in the block or attempted movement of multiple teeth.  With too little force, the desired tooth movement does not occur.  With heavy or inappropriate forces, anchorage loss will occur (Feldmann & Bondemark, 2006; Roberts-Harry & Sandy, 2004).

In premolar extraction space closure, there will be some mesial movement of the first permanent molar; the reverse is true for molar distalisation, where there will be anchorage loss in the incisor or premolar area (Feldmann & Bondemark, 2006; Geron et al., 2003).

Other factors contributing to anchorage loss include the type of tooth movement, root angulation, mechanics, patient compliance, overjet and presence of pathology such as periodontitis or ankyloses (Geron et al., 2003).

In order to adequately manage anchorage and prevent loss, molar and canine relationships, overjet and centrelines should be reviewed at every visit (Naish et al., 2015).

Anchorage is complex and thorough understanding is essential in order to adequately assess, diagnose and plan orthodontic cases.  Continual in-case evaluation is required to achieve the desired outcome, as not respecting anchorage requirements can lead to poor occlusal finish and an inadequate correction of the malocclusion, resulting in an unhappy patient, unhappy clinician and undesired results.